2021 is the year of audio. Group chat apps have generated buzz around the world, led by the hype surrounding Clubhouse. Tech giants as well as startups quickly churned out similar instant conversation products to gain a slice of the pie. Facebook said it would soon launch a clone, while Twitter is already testing a similar feature. In China, where Clubhouse is now blocked, a number of homegrown counterparts have emerged.Among them, ByteDance, the parent company of TikTok, is developing a similar product.

The fad of Clubhouse may have passed, but audio is here to stay. It is a format that feels more authentic and less invasive. Direct conversations give users more space to build relationships, while privacy is ensured during the exchanges. However, it is never easy to find a tipping point within a market. While it is true that the tech giants have sufficient resources to get ahead in the race, smaller startups have their advantages too. They are more focused, more adaptive when tapping into a market.

Sango is one app that is setting a high bar.

The rise of a MENA-targeted audio social app

The Clubhouse team was not the first one to realize the potential of audio in social applications. A year before Clubhouse’s exclusive app whipped up a craze, Sango, a social audio app built for the Middle East and NorthAfrica, was launched and rapidly won the favor of young people in the region. Within a year, it has accumulated users from more than 50 countries and hit the top list of entertainment installations in Saudi Arabia, UAE, Kuwait, etc, according to data from APP ANNIE. In just three months after its initial rollout, Sango hit 1million users, and the number is still growing beyond expectations.

Why did Sango zone in on the MENA market? If we scrutinize the global social media landscape, we would find that markets such as Europe and the US are already dominated by mainstream platforms such as Facebook and Instagram, while the smaller markets like Southeast Asiaare almost saturated due to the presence of well-funded tech firms.

While social media giants such as Facebook and Instagram implement global strategies, few truly localize their product to satisfy the needs of the MENA market. Sango’s founder, Jean Wang, believes a more localized social product that takes into account the region’s cultural and social background will be the next hit, while the dominant platforms lose their sheen in MENA.

In-person social interactions in some parts of the region are at times limited due to religious reasons. At the same time, high internet connectivity gives new online social applications the means to take off.Saudi Arabia’s internet penetration rate has grown from 2.21% in 2000 to 95.7% today, while Bahrain’s rate even surpassed the US and France to hit an impressive 98%.

Young people in MENA are crazy about social networks. The MENA region carries incredible promise in terms of social media use. According to a study from New Media Academy in Dubai, Internet users in the Middle East have an average of 8.4 social media accounts, while users in UAE have an average of 10.5 accounts, which is the highest number of social media accounts globally. Whatsmore, MENA users spend over three and a half hours a day on social networks. 75% of them increased their consumption of social media due to social distancing during COVID-19. There are huge opportunities to unlock in MENA.

An ecosphere, a home for Muslims

Launched in April of 2020, Sango is first designed as a social and entertainment audio app, which provides young people in arabic-speaking countries a platform to virtually get together and meet each other. Users can form and join chat rooms for different purposes, and interact with their friends through games embedded in chat rooms.

With the strong vision of bringing happiness to its users, Sango’s founder and its team are going further to improve the product. Too often, social media platforms are used to show off or amplify voices, at times triggering the bandwagon effect and minimizing individuals. What sets Sango apart from its many competitors is the aim to create instant joy and fun, alongside a sense of belonging within a community for its users.

More interactive features were introduced in Sango’s latest version. The Group section allows users to establish a community easily, based on the topics that interest them. Whether you are a music lover or a sports fan, you will find the right group of people to link up with. Meanwhile, one can also decorate their virtual home, post about their life, and more. Sango redefines the concept of “social life” by adding various layers to its product.

Millions of young Arab users are drawn to Sango’s diverse possibilities for fun interactions. Movlogs, a YouTube influencer with more than 10million subscribers, launched his first livestream on Sango during Ramadan. He also established a group within the app for his fans to talk with each other. The real-time interaction with his followers turned out to be an exciting development. People flooded into the app for the chance to participate in the conversation or play a game with their favorite influencer. “It feels like a real-time party,” Movlogs said.

Unlike Clubhouse, Sango breaks down the walls of exclusivity. It’s an audio app for people who pursue a social life in a stress-free way. Easy conversations, fun games, and vibrant parties are within reach, and connections with one’s community are available no matter where a user is. Sango blends the instantaneity of audio communication with the amusement of gaming. It frames a new lifestyle for young people in the Middle East, and is the app that they log on to during their downtime. 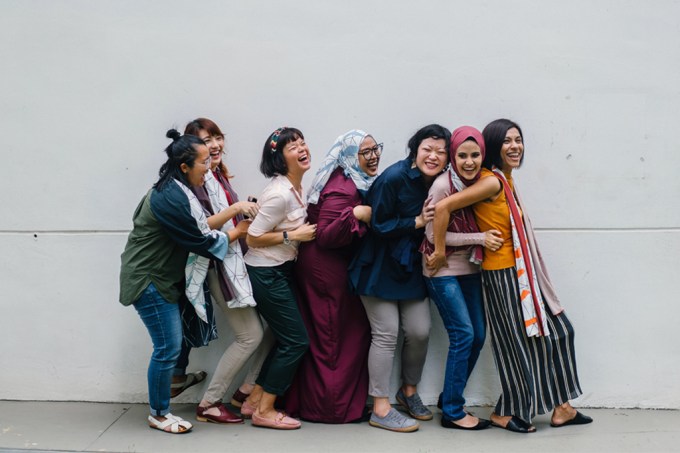 Sango is also more than a social application; it’s an ecosphere within which Muslims can find their “home” online. According to the Arab Youth Survey, young Arabs regard religion as the central factor in their identity, more so than family and nationality. To better connect Muslims, Sango has integrated a variety of local and religious elements in the app. Most of the main features are built upon a solid understanding of Muslims’ religion and culture.

Jean Wang often emphasizes the intention behind a product like Sango:“Everyone deserves a home, but not all are lucky to have one. Our app thrives to give users a home online, which is always associated with joy and relief.”

That purpose means a lot to Sango’s broader community. During Sango’s first anniversary celebration, users expressed their love and appreciation for the app. “It’s the best audio broadcast and voice chatting app. Met many talented and respectful people during my downtime. This app brightens my day,” a user from Dubai commented.

Another big fan of the app said, “I want to thank the founder of this app. Sango gives us the chance to connect with each other. It brings us together.” Such comments are not uncommon. Sango is more than a tool for communication, it’s a family that accompanies you through ups and downs.

Sango’s slogan is “we make happiness heard,” and the app does exactly that. Jean often reiterates that an excellent social product should speak to the needs of its users at various levels. Besides communicating with others, people desire a place where they can find a sense of belonging.

The support of Sango’s users encourages the team to continually build new functionality for its app, and the experience of Sango’s users is what the team values the most. Aside from a variety of social features,Sango also provides opportunities to its users to earn an income by becoming a broadcaster. Currently, more than 10,000 broadcasters are active on Sango.

Soma, a 23-year-old woman from Kuwait, shared how Sango made her life better. Because of the pandemic, Soma lost her job at a restaurant. Fortunately, she found out from friends that she could earn an income on Sango as a broadcaster. Soma is a talented singer, so she began broadcasting regularly on Sango and made enough money to tide her over a tough time. Her fans have purchased an enormous amount of virtual gifts for her as gestures of appreciation.

“Sango makes my life better. Besides earning a living, I realise my values. I met friends who truly appreciate my talent. I could hardly think of another way to do so without challenging our culture.” Soma is now a broadcaster with more than 1000 fans on Sango.

Sango thrives by giving its users opportunities to play different roles,from an active participant in a conversation, to someone stepping into the spotlight to showcase their talent, or even simply a passive listener looking for interesting ideas. Sango is a place where anyone can live out their potential.

Audio makes this feel immediate, and forms bonds between people who may otherwise never have the chance to interact with each other. With its unique vision and strategy, Sango is a contender among the many social networks that operate in MENA.