All eligible Ontario residents are expected to be fully vaccinated against COVID-19 by the end of this summer, with second dose appointments opening up to those 80 years and older starting on Monday.

Today, provincial health officials released their plan to administer second doses, as Ontario hit its target this month of administering first jabs to 65 per cent of all adults. In addition, over 15 per cent of residents between 12 and 17 years old have received at least one dose.

Officials announced that the dose interval between first and second shots has been shortened from four months to as little as 28 days. However, the rollout of second doses will largely depend on supply, which has been steadily arriving in the country over the past few weeks.

“Of course this depends on the vaccine supply and the availability of appointments in your region. So while not everyone will be able to get their second dose shot four weeks after their first, we want to ensure you’re fully immunized as soon as possible,” Ford said. 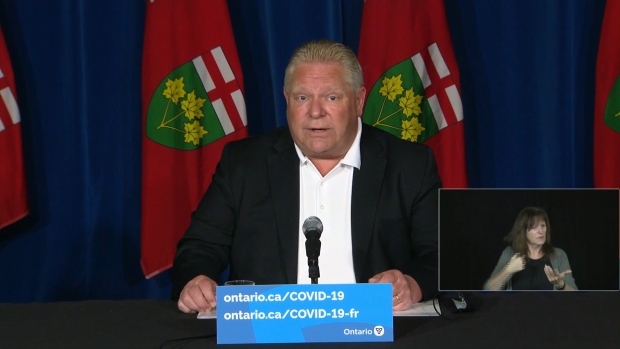 In June, the province expects to receive roughly 4.7 million doses of the Pfizer vaccine from the federal government. Shipments of the Moderna and AstraZeneca vaccine are not yet known.

“It has been a very positive May in terms of seeing consistent supply of Pfizer, but Moderna, as Premier Ford mentioned, has been very inconsistent in when we receive it and how much we receive. As those supply lines become more consistent it just makes it easier to offer to more people,” Solicitor General Sylvia Jones said at the press conference.

As a result of shortening the dose interval, officials expect that all Ontario residents 12 years and older who want to be vaccinated will receive their second dose by the end of August.

The second dose strategy will be based on a “first-in and first-out” method, meaning residents can accelerate their second dose appointment based on the date of when they received their first dose. Second doses based on age will primarily be a factor for those 70 years old and up, unlike the previous strategy for first doses which was allocated based on age groups.

Starting on Monday at 8 a.m., residents 80 years old and up can start booking their appointment for a second dose on the province’s booking site.

On the week of June 14, eligibility will expand to residents between the ages of 70 and 79, and then eligibility will subsequently be broadened to other Ontarians based on when they received their first dose.

MORE: When can you book your second COVID-19 vaccine in Ontario?

For those who received their first dose between March 8 and April 18, they can start booking their second dose in the week of June 28, depending on supply. Appointments at this time will also open to those with highest health-risk conditions and special education workers.

Next, second dose bookings will open to those who received their first jab between April 19 and May 9, and to those who are 50 years old and up and with high-risk health conditions.

On the week of August 2, Ontarians who received their first shot between May 10 and May 30, and those who cannot work from home and who have at-risk health conditions, can start booking their second shot.

And lastly, the rest of Ontarians who received their first dose on May 31 and onwards, including those between 12 and 25 years old, can start booking their second shot in the week of August 9.

Two doses of vaccines that are currently being administered in Ontario are needed for full immunization against COVID-19.