The United States saw a significant rise in suspected suicide attempts among teen girls during the pandemic, a new study from the US Centers for Disease Control and Prevention finds. 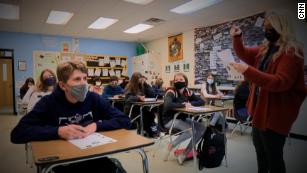 How to help someone in emotional pain

More research is needed to determine whether there are any differences in the data by race or ethnicity — and whether similar findings would emerge among suspected suicide attempts with less severe injuries that were not reported to emergency departments.
Previous research had already shown that last year, the proportion of mental health-related emergency department visits among adolescents ages 12 to 17 increased 31% compared with the year prior in 2019, according to the CDC.
With the release of the new study, the CDC noted that suicide can be prevented with more social connections for young people, the teaching of coping skills, learning the signs of suicide risk and how to respond, and reducing access to lethal means of suicide, such as medicine and firearms.
Some signs of suicide risk include talking about wanting to die or feeling hopeless. As more young people get vaccinated against Covid-19, that may help increase social connections with others.
The National Institute of Mental Health notes on its website that there are five steps you can take to help someone in emotional pain:
Share