Skip to content
That’s how Andy Duran describes the feeling of riding a skateboard.
“Imagine your favorite song and then suddenly being able to kind of feel the song moving through you in the wind,” Duran said. “That’s what skating kind of feels like. It just feels really beautiful.”
Duran grew up skateboarding in California’s Bay Area in the late 1990s and early 2000s. Now 36 years old and a professional sex educator in Oakland, California, he found himself stuck at home when the pandemic hit. That’s when he got the urge to get rolling again.
Once he began looking online for new gear, however, he was surprised by the lack of resources and information for overweight skaters. Duran currently weighs over 300 pounds and identifies as “fat.” Many of the boards had weight limitations below 300 pounds and finding the right pad sizes and gear was difficult. Even plus-size skating t-shirts were scarce. 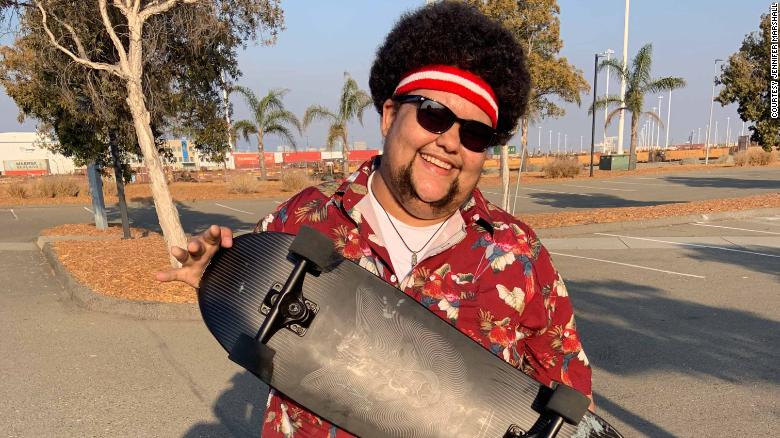 That’s when the idea of Chub Rollz ramped up in Duran’s mind.
He wanted to start Chub Rollz as a safe space open to plus-size people wanting to learn and skate together – be it on a skateboard, roller skates or any other type of wheels. The group hosts monthly meet-ups, and Duran arrives early to set out skateboards, pads and gear to help anybody wanting to stop by and give skating a shot.
“You don’t have to be Tony Hawk to enjoy this. It can be really beneficial,” Duran said. “I feel very free to be in my body and be myself on a skateboard.” 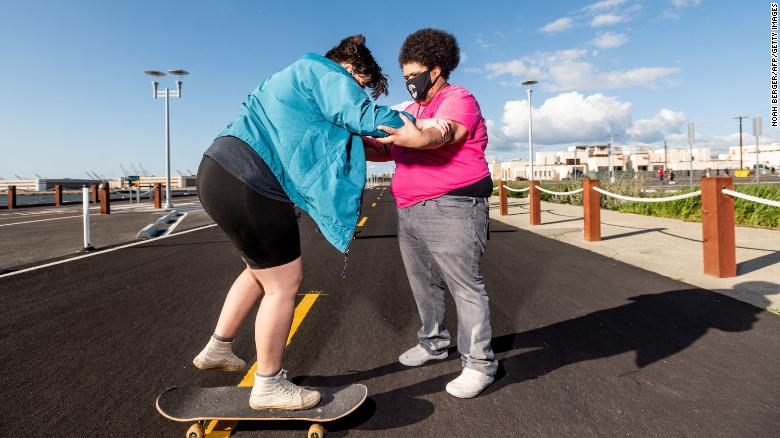 Andy Duran (R) helps Bella Bond learn to skate during the first Chub Rollz event.
Besides being body-positive, Duran, who is Black and Mexican, is proud that Chub Rollz is “BIPOC-founded” and led by a “queer and trans team.”
The group is striving to ensure everyone feels welcomed and safe in the new community they are building, he said. “We can showcase what this community looks like in full and not just what the advertisements look like or what the professional athletes look like.”
About 20 skaters a month have been taking part in the group’s skating meet-up sessions, and people all across the United States and as far away as Australia and South Africa have taken part in the group’s virtual discussions.
Andy Duran got motivated to get back into skateboarding while being stuck at home during the pandemic.
“I would see that they didn’t sell shirt sizes past large, and it immediately made me feel like they had an idea who was going to be a skater. It felt like I couldn’t even be a fan.”
“I was surprised to be met with weight limits (on skateboards) that were weights that I was above when I was skateboarding in middle school and high school. I was a fat kid growing up for sure,” Duran said. “I was 250 pounds or so in high school, and I still have that deck (the flat part of a skateboard) to this day. I’ve never broken it.”

Duran wanted to prove that people of all sizes could skateboard and hoped he could encourage others. He began posting videos of himself and friends skating, but he was disappointed to see the negative comments roll in.
“We were immediately hit with fat phobia comments about our body size, comments about what the material of our skateboards or skates should be made out of to hold us. It can definitely be heartbreaking when you’re trying to create this visibility and knowing that the visibility also opens the door for more attacks.”
Duran says that one thing that sets Chub Rollz apart from other plus-size groups is that weight loss is not a factor. The goal is just to have people skating and moving for fun.
“The reality is that bodies are just as they are. Some bodies are big, and some bodies are not, and some bodies will fluctuate,” says Duran. “Not everybody who is fat is actually looking to change that in any way. We just have to create safe spaces for fat folks to be themselves and to explore and move as they like.”
Share