Have you ever wished you could puke on demand? Have you wanted to collect your puke, put it in your backpack, and use it later to power aging machinery? Have you considered that your puke might be related to cosmic horrors nesting inside you? These are some of the many questions raised by Death Trash, the isometric pixel art action RPG from developer Crafting Legends made available via a 2-3-hour demo in the Steam Summer Next Fest.

Death Trash doesn’t care if you think puking is juvenile. You’ll be seeing and doing a lot of it. It’s mapped to a specific button and a cooldown timer in the way a lesser game would map an area-of-effect attack or another special ability. I was carrying, entirely by choice, seven pukes in my inventory within the first few minutes of the demo. Random NPCs would sometimes stop and puke. After about an hour I met a couple whose lives seemed to revolve around one of them puking – for a while we stood next to each other, joyfully taking turns to puke.

Of course, there is a lot going for Death Trash besides on-demand puking. The combat is a satisfying mix of real-time melee, ranged, cybernetic abilities, and light stealth that falls somewhere between the original Syndicate and the likes of Hyper Light Drifter. Leveling up is traditional RPG fare. Experience points are invested in a few key attributes and skills, like Strength and Lockpicking, but with immediately obvious consequences for the gameplay and with some surprises tucked away under Artistry, a mix of “creativity and a feel for special opportunities.” There is a crafting mechanic for additional ammo and items, but it’s a light touch and integrated into an easily manageable inventory. Dialogue is usually just a few snappy and sharply written lines, interlaced with swearing and offbeat humor, which contextualize a pleasantly frugal (at least in the demo) number of quests. 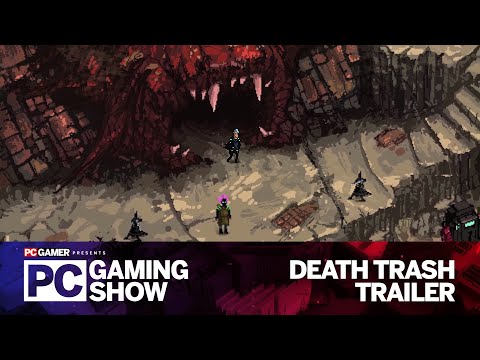 Indeed, if there is one thing to recommend about Death Trash besides the puking, it’s the pacing. There are no lengthy text boxes common to RPGs, overlong dungeon runs, or 30 minutes of inventory management. No element of the game hangs about too long before cycling back to another. As a result, I completed the demo in one sitting without really noticing and was disappointed that a giant naked figure with bleeding eyes submerged in a lake of blood was the end of it.

The naked figure isn’t an outlier. The aesthetic is a grimy palette of blacks, browns, and grays, liberally covered in the gore of fleshy tentacles and bleeding carcasses. There is more than a touch of the old isometric Fallout titles, from the dank gray bunkers to the tongue-in-cheek nihilism of its NPCs. But there is also the cosmic despair of Lovecraftian horror and the revulsion and body horror seen in something like I Have No Mouth, and I Must Scream.

So it’s perhaps fitting that puking isn’t just here for laughs, but plays a role in the broader narrative. It does so mechanically, like when I shove some puke inside a cyborg to power it on, rip off its head, and take the head to be friends with a sentient kraken, who in return grants me the power to communicate telepathically with a cluster of gore that progresses the story. And it plays a role thematically, like when it’s suggested that you may have a fleshy parasite living inside you, which could be responsible for your puking powers.

A part of me is impressed that Crafting Legends found a way to justify an absurd mechanic. But then I remember that Fallout 2 had a quest that let you shovel Brahmin (mutated two-headed cow) excrement, which eventually granted the Expert Excrement Expeditor perk and some experience points, but then served no other purpose whatsoever. It was so brilliantly and stupidly pointless that, more than 20 years later, it’s still one of the RPG sidequests I remember most vividly.

And so another part of me thinks that puking doesn’t need a narrative justification. Death Trash is shaping up to be a great enough game that it could get away with having puking just for the sake of puking — to serve no purpose higher than the intrinsic joy of being able to be sick at the press of a button. After all, Chekhov might have said that “one must never place a loaded rifle on the stage if it isn’t going to go off,” but he didn’t say anything about puke.